Israels mental stability is waning, as the moral imperative shifts the global moral compass from within as well as outside of Palestine occupied lands. The Mental health issues here are obvious, God is a real estate agent.

You can’t ask that! You can’t even think that out loud, at least not in Europe where laws against free speech prevent it. Any criticism or questioning of Israel is likely to get you labeled an “anti-Semite” or pro-Palestinian, and that’s a crime. Just ask the British Parliament. But this is the U.S., so let’s quote active Israeli Army General Golan, who is engaged in exterminating Palestinians. On the eve he gave his honest assessment of what Israel is doing, comparing modern Israel to Nazi Germany (Jewish Amy Goodman’s Democracy Now!)

(May 4, 2016) An Israeli Army general has compared modern-day Israel to “nauseating trends” in 1930s Germany.

Following a firestorm, he was forced to walk back the comments, saying he had not “intended to compare Israel to Nazi Germany.”
#BDS
More Democracy Now – http://www.democracynow.org/2016/5/5/&#8230;

Today is Holocaust Remembrance Day, when we call to mind how a racist, fascist police state got carried away: ethnic cleansing, genocide, white supremacy, mass murder. Not only Jews, but undesirables, gypsies, gays, and intellectuals were systematically spied on, picked up by some secret police (Gestapo or Mossad), and disappeared.
Do similar things happen in modern Palestine as Europeans and others attempt to convert it into the “State of Israel,” the official name for a non-state without a constitution and large open-air prisons? That question cannot be asked! That comparison cannot even be hinted at! It’s anti-Semitic! Or so we are told, only no one told this Israeli Army General Golan.

By Andrew Tobin August 4, 2014
The results emphasize that Israel’s violent environment puts its teens at risk for mental health problems, the researchers say. The fallout from the accumulated trauma goes well beyond post-traumatic stress disorder and may include a wide range of disorders, psychological symptoms, and developmental impairment, they say. -The Times of Israel

Gaza’s Mental-Health Crisis and the Trauma of Permanent War

On the anniversary of the 2014 war, Gaza’s kids are still trying to recover from years of cascading violence.

“The Jews shot me.” I was eating breakfast with 3-year-old Ibrahim Awajah in February 2015, in the northern Gaza town of Beit Lahia, when he made this proclamation. His father, Kamal Awajah, saw the surprise on my face.

Fadi Abu Shammala in Gaza contributed to this report.

“No, no, you’re the second Ibrahim,” Kamal quickly corrected the small, sandy-haired boy. “It was your brother who was shot, not you.”

The first Ibrahim, 9 years old, had been shot and killed by an Israeli soldier during the 2009 attack on Gaza, which the Israeli military named Operation Cast Lead. His parents and siblings witnessed the killing, along with the demolition of their home. The second Ibrahim, born in 2011, was named after his martyred brother. He has already lived through two massive military campaigns. He has also lived most of his young life in tentlike structures, first while his family’s house was being rebuilt after Operation Cast Lead, and then after it was destroyed again during the summer 2014 war.

In a February 2015 report, UNICEF estimated that nearly 300,000 children—approximately one-third of Gaza’s youth—were still in need of psychological and social support six months after the war.

“The issue is the condition of chronic war, which doesn’t lead to speedy recovery,” said Dr. Elena Chere- panov, a mental-health specialist whose expertise is in collective and cultural trauma. She compares the psychological impact of the violence in Gaza to the public-health crises she’s seen in Chechnya, Liberia, and Abkhazia. “Ongoing war means a really severe and systemic traumatic impact on the community, which permeates all areas of life. There are generations who grow up never having the chance to live in safety or plan for the future, which is crucial for trauma recovery.”

The Psychology of War

Why do human beings find it so difficult to live in pePosted Mar 05, 201 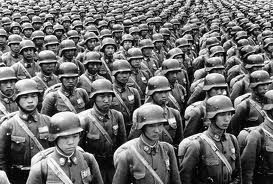 The issue of empathy is important here too. One of the most dangerous aspects of group identity is what psychologists call ‘moral exclusion.’ This happens when we withdraw moral and human rights to other groups, and deny them respect and justice. Moral standards are only applied to members of our own group. We exclude members of other groups from our ‘moral community,’ and it becomes all too easy for us to exploit, oppress, and even kill them. -Psychology Today