Text from the zine:

The white race is a club. Certain people are enrolled in it at birth, without their consent, and brought up according to its rules. For the most part they go through life accepting the privileges of membership, without reflecting on the costs. 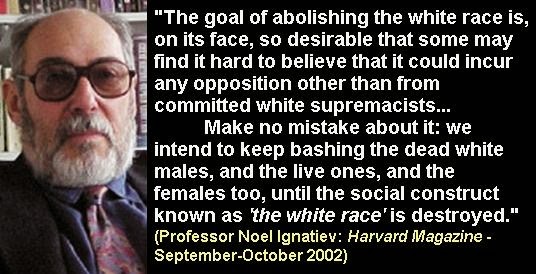 Whiteness is not a culture. There is Irish culture and Italian culture and American culture – the latter, as Albert Murray pointed out, a mixture of the Yankee, the Indian, and the Negro (with a pinch of ethnic salt); there is youth culture and drug culture and queer culture; but there is no such thing as white culture. Whiteness has nothing to do with culture and everything to do with social position. It is nothing but a reflection of privilege, and exists for no reason other than to defend it. Without the privileges attached to it, the white race would not exist, and the white skin would have no more social significance than big feet. Before the advocates

One of the truths that emerge rather quickly when one is attempting to theorize race and racism is that ontological questions about the reality of race, or lack thereof, lead quickly to more ethical and political questions about the nature of racism as a social phenomenon and vice versa. This chapter deals with the question of racial ontology, biology and human variation, as well as the history, political and social relations of power, the nature of individual and social identity, and the constitution of meaning within a social world. This chapter also discusses the question of whiteness and how particular immigrant groups in the United States came to have white status, the connection between racial ontology and a corresponding view of racism and racial liberation, the views of Matthew Frye Jacobson and Theodore Allen, the basic argument for the new abolitionism, whiteness and white supremacy, culture, racial essentialism, history, and contingency.

Fordham Scholarship Online requires a subscription or purchase to access the full text of books within the service. Public users can however freely search the site and view the abstracts and keywords for each book and chapter.

‘…from time to time a study comes along that truly can be called ‘path breaking,’ ‘seminal,’ ‘essential,’ a ‘must read.’ How the Irish Became White is such a study.’ John Bracey, W.E.B. Du Bois Department of Afro-American Studies, University of Massachussetts, Amherst

The Irish came to America in the eighteenth century, fleeing a homeland under foreign occupation and a caste system that regarded them as the lowest form of humanity. In the new country – a land of opportunity – they found a very different form of social hierarchy, one that was based on the color of a person’s skin. Noel Ignatiev’s 1995 book – the first published work of one of America’s leading and most controversial historians – tells the story of how the oppressed became the oppressors; how the new Irish immigrants achieved acceptance among an initially hostile population only by proving that they could be more brutal in their oppression of African Americans than the nativists. This is the story of How the Irish Became White. – Amazon

“[T]hey steal, they are cruel and bloody, full of revenge, and delighting in deadly execution, licentious, swearers and blasphemers, common ravishers of women, and murderers of children.” —Edmund Spencer
“The emigrants who land at New York, whether they remain in that city or come on in the interior, are not merely ignorant and poor—which might be their misfortune rather than their fault—but they are drunken, dirty, indolent, and riotous, so as to be the objects of dislike and fear to all in whose neighbourhood they congregate in large numbers.” —James Silk Buckingham

These are not quotes from a Trump rally or an “alt-right” message board. These are historical statements from yesteryear describing a despised race of people in America. They are indicative of the sentiment of white people throughout this country who thought a subhuman species good for nothing but work and servitude might ruin America with their crime, poverty and interbreeding with white women. They were not referring to Africans, Mexicans or Muslims.

They were talking about the Irish.

First, we should get this out of the way: One of the favorite recurring themes of racists in America is the idea that the Irish came to America as slaves and had it as bad as, or worse than, Africans. According to these “racialists,” the European blood in the Irish made them pull themselves up by their bootstraps and integrate themselves into the opening arms of American liberty. They never bitched and moaned about their situation, so …

All of this is wrong. In fact, it is too stupid to give space, credence or words, so read where it is debunked here and here.

But as we celebrate the first St. Patrick’s Day of the Trumpian era, we should remember when America passed laws against another group of immigrants. We should recall when this country tried to ban another group of people based on their religion. We should never forget that both “American” and whiteness are sociopolitical constructs that have evolved over a long period of time, always seeking exclusion and supremacy, and it was not so long ago that Irish Americans were on the outside looking in.

In his book The Renegade History of the United States, Thaddeus Russell explains that the first large wave of Irish immigrants worked low-paying jobs—mostly building the canals along the Canadian border—that other Americans wouldn’t do. Like finding out a song you thought was new is actually a 100-year-old remake, the Irish were simultaneously accused of stealing all the good jobs and branded as “lazy” and “shiftless.” They were also thought to be the nonwhite “missing link” between the superior European and the savage African based on stereotypes from the early American media, according to the Boston Globe:

In the popular press, the Irish were depicted as subhuman. They were carriers of disease. They were drawn as lazy, clannish, unclean, drunken brawlers who wallowed in crime and bred like rats. Most disturbingly, the Irish were Roman Catholics coming to an overwhelmingly Protestant nation and their devotion to the pope made their allegiance to the United States suspect.

In 1798, Congress passed three “Alien Acts” based mainly on fears of Irish-Catholic, anti-immigrant sentiment. These new laws gave the president the power to stop immigration from any country at war with the U.S. and the right to deport any immigrant, and made it harder for immigrants to vote. Then, again in the late 1840s, a nationalist political group called the Know-Nothings sprang from a populist movement of poor whites who were dissatisfied with the two-party system and started the American Party, intent on preserving America’s culture by restricting immigration, especially from Catholic countries—including by Irish Catholics. They managed to get candidates elected into the highest political offices in America, including a president.

Does this sound familiar to anyone?

Continue Reading at the Root.com