The idea of a sponge city is simple – rather than using concrete to channel away rainwater, you work with nature to absorb, clean and use the water.

What we have done is totally wrong, he says. He returned to China after studying landscape architecture at Harvard University in the US, determined to tackle one of the biggest problems facing cities.

His solution was to work with nature rather than against it.

During the dry season, the terrace is a park for residents to enjoy. But during the rainy season it can flood, protecting the city without the need for grey infrastructure like flood walls or dykes.

Not only does this safeguard the city by working with nature, but the water is clean, vegetation can grow and a habitat is created for wildlife. 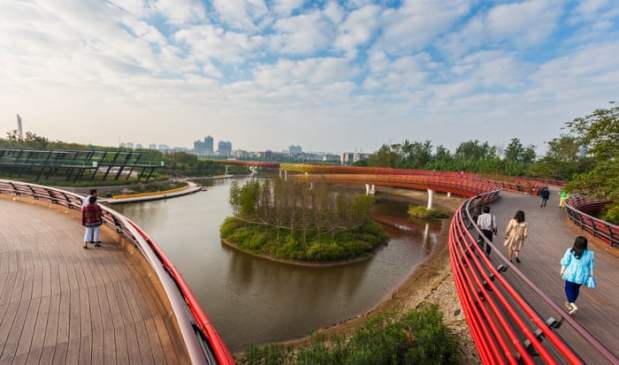 All from one city

And it all began in just one Chinese city, 20 years ago.

Today, 250 places in the country are working with Kongjian and his team, as well as urban areas everywhere from the US and Russia to Indonesia.

It’s an inherently global answer to a problem that afflicts a variety of places, he believes. “The ecological-based or nature-based solution can be a solution global-wise.”

The ideas presented in this article aim to inspire adaptation action – they are the views of the author and do not necessarily reflect those of the Global Center on Adaptation.